How did the shaman’s path of Rider Arevalo begin?

When Rider was 10 years old, a very important event had happened in his life. That event allowed the future shaman to find his path. During one ceremony Rider’s father was on the verge between life and death. He lost the connection with the physical world, and was unconsciouse and breathless. There were other shamans in the ceremony as well, that started to sing to help Rider’s father. 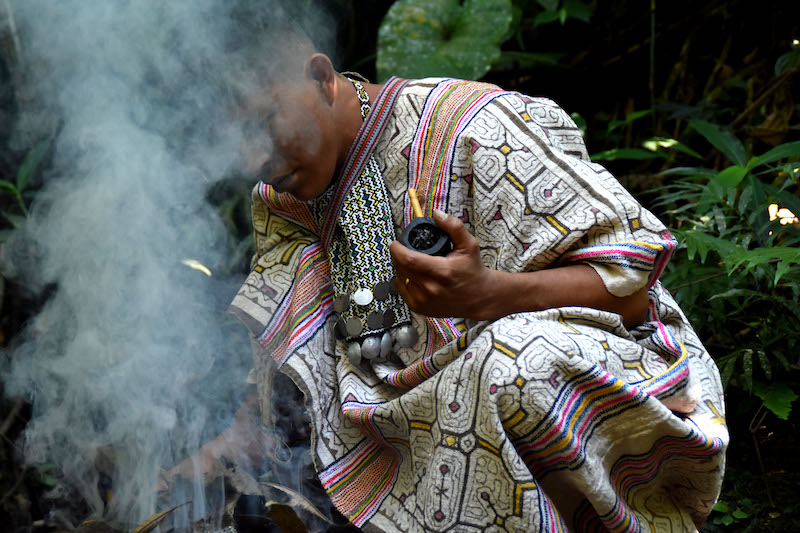 However, Rider, who was also in a maloka (a special place for the ceremonies) during the ceremony, felt that he wanted to help as well. He begun to concentrate, to understand why his father lost consciousness. He saw that no one in the room could help. Some where not able because of lack of knowledge, some didn’t want to because of the feelings of greed, jealousy and competition.

In that moment, Rider realized that in the future he wants to learn how to lead shamanic ceremonies, thus in the hard moments he could help his family. Until then, little boy had studied only the theory part of the ancestral medicine, but soon after, he decided to begin practising diets with different teacher plants, and to participate in ceremonies with Ayahuasca actively.

When Rider turned 14 years old, he began to hold Ayahuasca ceremonies himself. At first, the ceremonies that he led were with women and children only because their energy was much softer. With people who had the tougher energies worked other shamans, including Rider’s father – don Guellermo Arevalo.

Rider’s young age bothered the older and more experienced shamans, who didn’t see his potential. However, that didn’t stop little boy from his growth in the shamanic healing tradition. The jealousy of others, and their biased attitude didn’t disturbed Rider on the way to his vocation.

The main reason for Rider always was the opportunity to help other people to heal. Firstly, he learned how to help himself, then began to practise with his family. Later Rider felt that with the knowledge he learned from the teacher plants, he can help other people, who needed that. Regardless the high level of mastery, shaman never considered himself superior to others. He just wanted to help people, who wanted to heal.

Challenges and problems on the way of Rider Arevalo

The main challenges for Rider consisted of other shamans, who didn’t like that such young boy was succeeding so quickly in the process of learning the ancient wisdom. They secretly wished that Rider would quit shamanic traditions, and stopped learning how to lead ceremonies with Ayahuasca.

To scare the newbie, other shamans would interfere within Rider’s visions, sending him demonic energies that demonstrated horrific realities. Competitors hoped that Rider would get scared, and his ability to participate in healing ceremonies will get blocked. However, these challenges and all the attempts to scare him only started his passion for healing to grow stronger.

After deepening the knowledge into the ancient wisdom of his ancestors, Rider had discovered a huge, unknown and mysteriously hidden world that was waiting to share its important and fascinating secrets with a brave boy. The new dietero (dietero is a person who diets with a plant to learn from it) was amazed by the power and wisdom of the plants. Rider had learned that some plants can connect a person to the cosmic energies, others can connect with the angelic realms or with extraterrestrial civilizations. There were also the plants, that could connect with the dark world, that was hidden from the most of the humans eyes.

Valuable experience of Rider working with the foreigners

The opportunity to work with the foreigners gave Rider the valuable experience and had broaden his life perspective. He was able to share the knowledge about his rich and ancient culture with the people from the other parts of the planet, as well as learning from them.

Rider always studied very carefully every person, who reached out for help. While listening to other people, maestro Arevalo learned others worldviews. Rider would go deeply into the inner worlds of a person, to find the solutions and answers to the most important questions.

How does maestro Arevalo get information, that is hidden from an average person?
Initially, knowledge comes as visual images. Wherein shaman not only evaluates what he sees, but also what he senses in that moment. Rider explains that sensing component has a crucial part in receiving the information through the mental plane. After the vision is received, maestro Arevalo begins to search of the supportive details in the inner worlds of the person, to get the whole objective picture and verification.

The flow of the information received during ceremonies with Ayahuasca can be quite large! At the beginning if his practice, the young shaman not always had the ability to perceive and believe in an authenticity of the received information. In those cases, Rider asked questions to other shamans to clarify the truth, and to understand the basic meaning of a visual image.

Rider explains that not always what someone sees in the ceremony is truth, sometimes information can be mistaken. Interpretation of the information can be affected by a person’s own consciousness and perception of the life reality according to someone’s life experience. In cases like that, having a strong and experienced maestro, who can help to differentiate between the truth and illusions, is very crucial. In the past experience, other shaman’s opinion had helped Rider to remove his own ego, and to look into the eyes of the truth.

Rider’s apprehension of the Divine

Originally, Rider believed that the physical world was the only one that existed. Thus, he didn’t believe in Divine. However, after a long diet with the master plants, maestro Arevalo saw terrifying visions of the other world in one of the ceremonies with Ayahuasca. That was a dark world, lifeless and horrible. That was the first time, when Rider saw the devil. In that moment, the young shaman suddenly realized that, if the devil did exist, that meant that Divine existed as well. He understood that the world consists from both the Light and the Dark. In that ceremony, the shaman had received the most important revelation in his life. 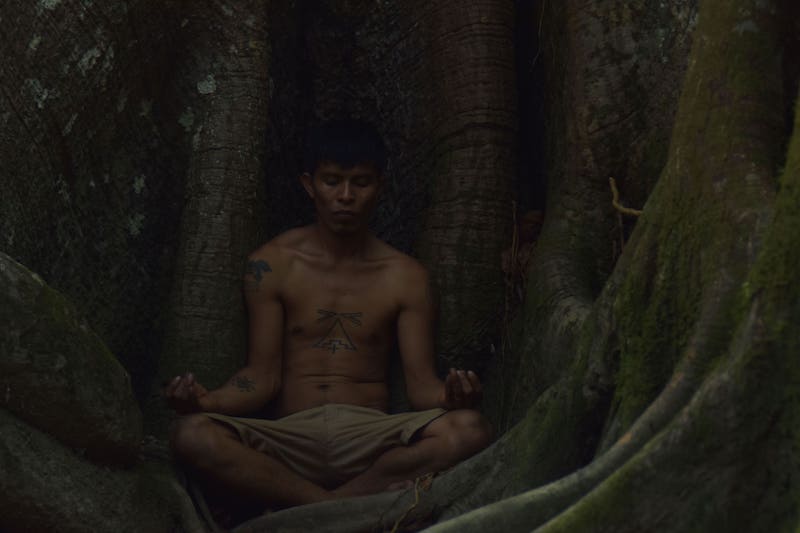 Much later, Rider had another very extraordinary vision. A vision of some higher conscious being came and answered all the questions about the meaning of the human existence in this world. The young shaman always had wondered why our world was so cruel, and had so much pain and suffering. The answer was that our physical existence – like a lesson or a trail, in learning which our soul grows. Rider understood that infinite soul comes into this world to gain an experience that is simply unavailable in other worlds. The strength of humanity lies in realizing the true meaning of the human existence. This knowledge would provide all necessary resources to overcome with dignity all of the challenges, and, surely, to make it to the next level of our evolution.

Rider’s opinion about the education system and modern schools

Rider was never a part of the system. He always had an inner aspiration to manage his own life independently. That is absolutely impossible in a school because the school itself is a big part of the system. Many layers of the hierarchy and leaders in the system had always contradicted Rider’s perception of life.

In his early age, the shaman had understood that the education system had its own agenda to teach people how to compete with each other. Rider’s schoolmates chose different paths. Some of them dedicated themselves to a career, some of them chose a family life with children, and some of them prefered misusing drugs and alcohol. These events wisely demonstrated that every single person makes their own choice on how to live a life, choosing a topic for own dedication.

After the school graduation, Rider had a strong passion for studying the Environment subject, to be able to help the planet and to protect nature and all living beings. If he wouldn’t find his vocation for healing people at the young age, he would most definitely became an ecologist.

Rider is a vivid representative of the Shipibo culture. For him Ayahuasca is a medicine. The most important part for the shaman is to explain all the required information, so a person has complete understanding of the process. For the first timers (people who do not have any experience with Ayahuasca) it is not necessary to drink right away, they still can participate in a ceremony, just observing and receiving the songs. After the first night, Rider has more understanding if a person is ready or if the purification process is needed, to prepare a person’s body and mind. 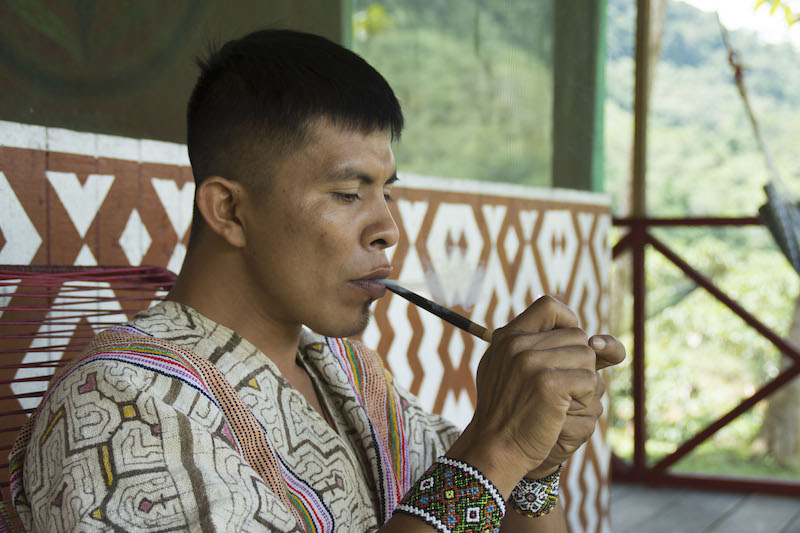 No one should affect a person’s decision about drinking Ayahuasca, says Rider. That must be    a completely conscious choice. Only in this case partaking in a sacred ceremony will benefit someone who is looking for healing.

To become a good shaman, Rider has walked a life long path of learning the ways of the ancient sacred tradition. Leading the ceremonies with Ayahuasca is not only the part of his culture, but also a very special kind of medicine. The knowledge and wisdom that he carries within used to be passed from one generation of the family line to the next generation as a main part of a knowledge keepers tradition.